There’s no denying that The Famous Group knows how to make an entrance. If you visit the Culver City, California company’s website, you’re greeted by either a sleek, powerful panther leaping at you from atop the Bank of America Stadium in Charlotte, North Carolina or a giant, menacing raven swooping down across M&T Stadium’s field in Baltimore, Maryland.

None of those mind-boggling, real-time fan experiences could have occurred without our 3D laser scans, point clouds and modeling.

TruePoint is excited to continue our long-standing relationship with The Famous Group because it demonstrates the flexibility and unexpected applications of our services. Like most of The Famous Group's staff, TruePoint is full of sports fans, so we’re thrilled to watch our work come to life in the games we love to watch.

“Most of the work we do is completed and then we move on to the next project,” says Jason Schaff, Senior Vice President of Customer Service & Marketing. “These types of projects are more rewarding because you can see the results of your efforts implemented in such a fun way.”

Our History in Mixed & Augmented Reality For Professional Sports Venues

Explosive augmented and mixed reality (AR & MR) fan experiences have been the calling card of The Famous Group for 20 years. That’s why TruePoint leapt at the chance to be a part of their groundbreaking projects, including the iconic return of “the big game” to Los Angeles with Super Bowl LVI. To read more about how we helped put everything from a virtual Halle Berry to the Lombardi Trophy and the L.A. Memorial Coliseum at the 50-yard line at SoFi Stadium, click here.

When COVID-19 kept fans away for their personal safety, we were tasked with mapping 15 NFL stadiums to help create a virtual fan experience. You can read more about our virtual fan project for Silver Spoon Animation, here.

In the case of the now-famous Carolina Panther video, we spent 1.5 days onsite, scanning Bank of America Stadium with a Leica P40 Scan Station to provide a hyper-accurate backdrop for their mascot.

We also scanned and modeled the statue of the fierce cat that guards the stadium gates so The Famous Group could bring Todd Andrew’s “Gentle Giant” sculpture to life to prowl, growl and celebrate with fans – both on television through the NFL broadcast and on the stadium’s own Jumbotron.

And the Baltimore Raven presented its own particular challenges because it needed to be able to perch on the goal posts and be highly visible in the night sky.

"The beauty of mixed reality is the ability of computer-generated objects to interact with the physical environment, this sells the realism," The Famous Group’s Greg Harvey said of the project.

"To achieve this, parts of the stadium were captured with a laser scanning technique. We scanned where the goal post was, where the field was, the vertical boards and brought that into a computer. When the bird is actually on the uprights, its claws wrap around the cross bar and its wings appear behind the uprights."

To learn more about how we employ state-of-the-art Leica and RTC360 3D laser scanners, click here.

Super Bowl LVI kicked off with every one of L.A.’s SoFi Stadium’s expanded 100,240 seats filled to watch the game, the amazing hip-hop halftime show headlined by Snoop Dogg, Eminem, and Dr. Dre, and something the live audience did not see coming: a total immersion, mixed reality fan experience featuring everything from Halle Barry to a perfectly rendered L.A. Memorial Coliseum, to virtual drones delivering the Vince Lombardi Trophy to centerfield.

After two years of pandemic lockdown measures that resulted in a mere 25,000 fans in attendance for Super Bowl LV, it was important to L.A. County and the NFL that they pull out all the stops in Super Bowl LVI: both for the 100,000 fans in the stands and the more than 208 million people watching at home.

And they knew exactly who to call to blow the doors off the crown jewel of L.A.’s pro sports venues, SoFi Stadium: mixed reality masters, The Famous Group, and TruePoint 3D Laser Scanning, among others, to create an out-of-this world fan experience.

“Our team are all sports fans at heart,” The Famous Group’s Executive Producer, Andrew Isaacson told sportsvideo.org, “and we’ve been blown away and humbled by the impact and reach these projects have. These productions that combine live performance with real-time effects are not easy to pull off, but we’re proud to be the at the forefront of brining cutting-edge technology to the sports industry to enhance the fan experience and create more immersive events.”

And when The Famous Group came calling again for their 17th year of providing outstanding effects for the Super Bowl, we were up for our biggest MR challenge yet: to scan and digitally map all of SoFi Stadium and render hyper-accurate point clouds and 3D models so that the VR artists and filmmakers could create virtual elements like a realistic 3D model of the Los Angeles Memorial Coliseum, and digital drones that matched the real drones that would deliver the Lombardi Trophy to the winners at the end of the game.

“We wanted the creative to lean into SoFi as a canvas and focus on the incredible,” The Famous Group’s CCO, Lauren Fisher, told sportsvideo.org.

One of The Famous Group’s biggest challenges was creating the cyclorama curtain depicting the L.A. Memorial Coliseum “hanging” in SoFi’s field and opening to reveal the virtual Coliseum and jumbotrons within. Every virtual piece had to look seamless for both the audience at home and the fans who were viewing the show in the stadium on the state-of-the-art Infinity Screen at SoFi.

That’s where we come in. Because just like in Charlotte and Baltimore, before any of The Famous Group’s Hollywood movie magic can happen, they need to be able to re-create the backdrop – the entire stadium itself – as the canvas for their virtual elements. That canvas has to be exact so that when the panther, the raven, or the entire L.A. Memorial Coliseum is placed on it, it looks like it’s really happening in the stadium. That means the 3D perspective, movement and measurements have to be precise. Otherwise, the illusion is ruined.

To give you some idea of the scale of the SoFi project, their Infinity Screen alone weighs well over two tons and is 70,000 square feet of area. We had to scan every millimeter of the stadium, encompassing…

To complete the job, we employed our RTC360 laser scanner, and finished the scans in just two days. We then delivered an intensity map point cloud and a 3D Revit model to The Famous Group so they could work their magic. You can read the case study for Super Bowl LVI, here.

“We brought the Coliseum into SoFi, bridging the past with present with a special nod to history,” The Famous Group’s Fisher said. “Tim Tubito and his team at the NFL were amazing creative partners in developing these ideas; it was a true collaborative effort.”

And we received this fantastic feedback for our part in the Super Bowl LVI collaboration from The Famous Group:

“Thank you to the TruePoint team for all the help on this one. It was super-important for everything to line up as accurately as possible on this huge stage, and your team was excellent again! We really enjoy working with you all and look forward to the next opportunity that come our way.”

We at TruePoint are honored and excited to continue to collaborate with The Famous Group to continue to wow fans and audiences all over the world. We’ve now scanned so many fantastic sports venues, that Lidar News featured us in “12 Days of Laser Scanning From 2021,” and we can’t wait to continue.

If you’d like more information about our 3D laser scanning, mapping, and modeling services, for entertainment or for your next construction project, click here to learn more. 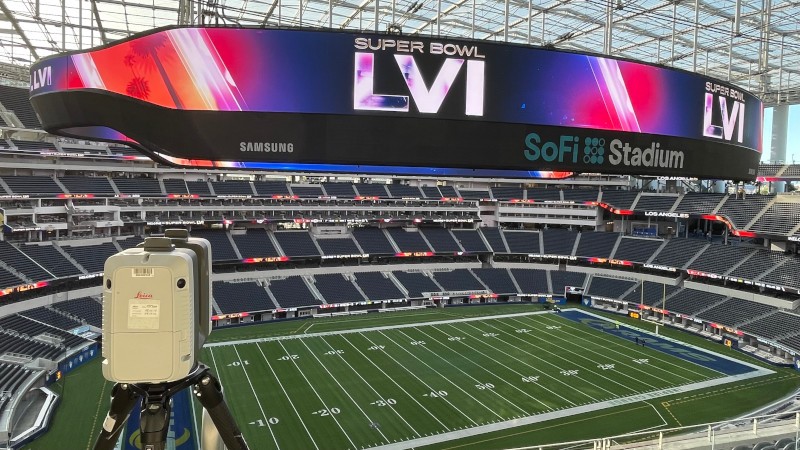 TruePoint 3D laser scanned SoFi Stadium to render accurate point clouds and a 3D model so the artists at The Famous Group could create mixed reality elements for the Super Bowl.