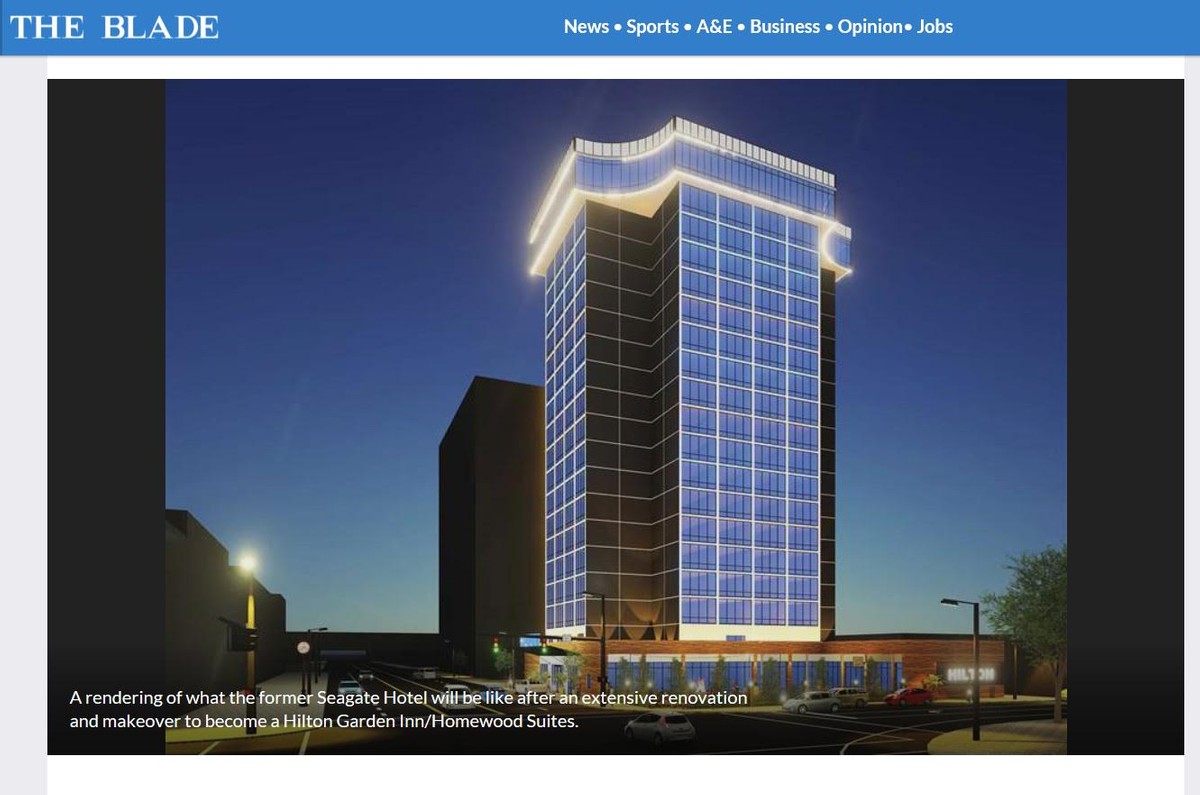 A rendering of what the Former Seagate Hotel will be like after an extensive renovation and makeover to become a Hilton Garden Inn/Homewood Suites. TruePoint performed 3D laser scanning services to plan for the renovation.

Lucas County officials are collaborating with a local hotel industry developer for a nearly $30 million investment to transform the former Seagate Hotel in downtown Toledo into a new 200-room hotel.

Plans for the $30 million project call for the new hotel to have more than 200 rooms, with about 80 percent of the space to be used for the extended stay lodging offered by Homewood Suites.

The ground-level area of the building will be developed into a lounge, restaurant, and outdoor patio area. The hotel will be operated and managed by Key Hotel and Property Management, which currently manages nine hotels in the Toledo area.

Jon Roumaya, president of Key Hotel & Property Management, said the two-brand concept will give hotel patrons choices in lodging, catering to business travelers as well as tourists and other travelers.

Commissioner Carol Contrada said the redeveloped hotel will provide additional lodging for a downtown that is expanding with the new ProMedica headquarters and other entertainment venues.

"This supports the additional need for hotel rooms in the downtown area. It supports the incredibly expanding travel and tourism industry. It is connected to our Seagate Convention Centre, and it is a flagship hotel," she said.

The agreement calls for the county to finance the construction debt for renovations and development through short-term loans and issuing long-term bonds. Key Hotel and Property Management will support the project financially with a $1 million payment.

The company will be responsible for hiring architects and contractors to perform the work. It is expected to enter into a lease agreement with the county to operate and manage the hotel.

County officials said the hotel developer will be required to make "sufficient" lease payments to cover the debt service on the bonds and loans in the first five years after the hotel is open for business.

The Lucas County Economic Development Corporation will retain ownership of the property for five years, at which time Key Hotel and Property Management will have the opportunity to purchase the property by assuming payment on the remaining debt and giving $1 million to the county.

Commissioner Pete Gerken said the financing structure for the project is similar to the bonding method used to construct Fifth Third Field and Huntington Center.

"The county is the bank basically," he said. "The county will not be going into its general fund or operating fund to finance this project for the first five years."

The County bought the blighted 47-year-old building in 2014 for $1.38 million with intentions for remediation and demolition. The county plunked down another $2.6 million for engineering work and a contract with a Cleveland-area firm for asbestos removal and demolition. The Toledo-Lucas County Port Authority contributed $460,000 toward purchase and demolition costs of the building.

After crews removed the asbestos and the exterior facade, private developers asked the county to halt further demolition to allow exploration for using the building for hotel or apartment use.

Baumann Enterprises Inc. of Garfield Heights, Ohio, was paid about $1.5 million for asbestos removal and other work, including the demolition of the ground-floor lobby area.

"The county made a wise decision, even though much maligned at the time, to purchase the hotel from Chinese investors," Mr. Gerken said. "We did this prior to any ProMedica announcement because this board has a vision, as we did with Fifth Third Field, Hensville, and Huntington Center, as to what downtown could be. We took a shot. I think we followed the right path, and we waited until the right time to do it."

Key Hotel and Property Management was the only firm to respond to the county's request for proposals with a plan to redevelop the property into a hotel or residential housing.

"They answered it, and we are very glad they did," Mr. Gerken said. "We wanted them to answer it. They are a locally owned company. They are in their properties every day. Their track record with their brand is impeccable. They are in the high-end ratings for standards within their hotels. They employ local people."

Paul Toth, the president and CEO of the port authority, said his agency's contributions to the project three years ago were made with the understanding it could someday get a return of its proceeds.

"We are excited to see this property being developed into a Class-A hotel," he said.

“It is not only a good investment, but it is certainly good for workers in the area to build the building. We think there will be ongoing revenue,” said Commissioner Tina Skeldon-Wozniak.

Construction is expected to begin in the spring. Plans call for the hotel to be ready for patrons about 18 months later.