"How to Document Your Plant in Days: Instead of Weeks With 3D Laser Scanning"

A power plant in Wyoming needed to capture the as-is conditions for pre-planning, fabrication, and clash detection for the addition of a new system, similar to a catalytic converter for vehicles. Collecting the data manually to help avoid clashes seemed almost impossible. After all, the space they were modifying was dominated by a complex gridlock of steel, and many of the key features of the "catalytic converter" needed to be located above the steel support structure in the power plant. So when TruePoint Laser Scanning introduced the engineering firm to laser scanning, they realized this technology could be the answer to their challenge.

Ryan Hacker, President of TruePoint Laser Scanning, estimates that to do the same job using traditional measuring devices would have taken six people about three weeks. To complicate matters, they would have had to rent lifts to access some of the higher locations. And this, of course, would have introduced additional safety concerns and prompted the need for additional Occupational Safety and Health Administration (OSHA) training.

TruePoint Laser Scanning imported the data into Leica Cyclone, registered the point clouds, and provided the engineers with files in Autodesk format (PCGs) for use in their modeling software. In addition, TruePoint gave them Leica TruViews, dimensional photographs overlaid on top of the point cloud data, which can be viewed in Leica Geosystems' free TruView panoramic viewer. Since the engineering firm handling the project was based in a different state, the Leica TruViews helped to familiarize them with the scan area and allowed them to return to the plant virtually as needed without traveling physically to the site. This allowed them to provide a much faster turnaround on deliverables for the plant.

Within three days of receiving the data, the engineers had already found some major clashes with their structural steel, which more than offset the scanning costs. 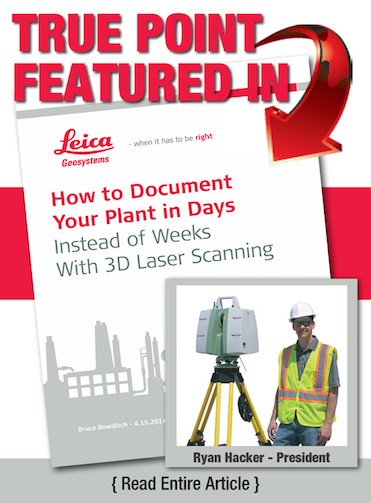