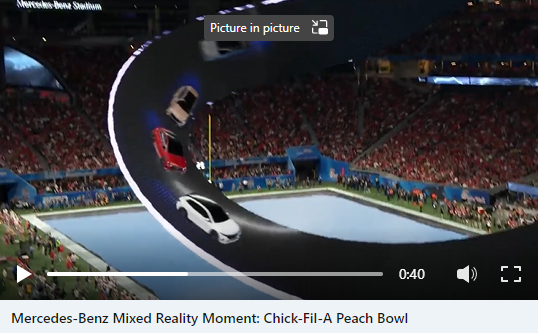 TruePoint 3D Laser Scanning is pleased to have played a part in this massive mixed reality collaboration.

The Georgia Bulldogs faced The Ohio State Buckeyes at Mercedes-Benz Stadium during the Chick-fil-A Peach Bowl in Atlanta, Georgia. Fans in the stadium and viewers at home witnessed a live virtual car race before the second half kickoff.

Mercedes-Benz AG USA planned the mixed reality experience to announce its new electric vehicle line up during the Chick-fil-A Restaurants Chick-Fil-A Peach Bowl on ESPN. The stadium was transformed into a futuristic, electrifying multiverse, featuring four 3D replicas of the new Mercedes-Benz electric vehicles speeding for 45 seconds across the field, goalposts and Halo video board at Mercedes-Benz Stadium.

This collaboration marks the first time that mixed reality technology has been used on a live broadcast during a college football game and is the latest in a string of innovations for the Mercedes-Benz USA brand. 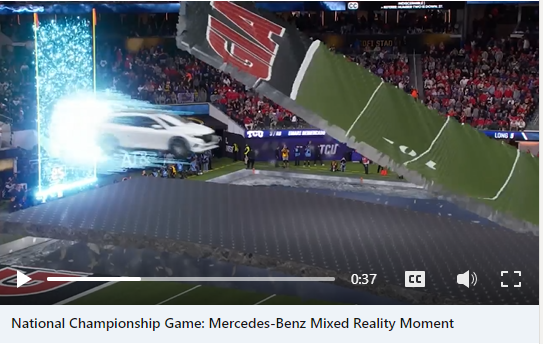 The Famous Group recreated the Mercedes-Benz mixed reality experience during the National Championship game on January 9, 2023 at SoFi Stadium. Similar to the first airing, the experience featured four virtual electric Mercedes-Benz vehicles racing for 45 seconds across the playing field, through the goalposts and up to SoFi’s signature Oculus board.

"The field’s going to rip up, and the cars are going to drive out," according to The Famous Group Partner, Andrew Isaacson. "But instead of that Mercedes Benz logo being attached to that halo board, it’s going to be inside that Oculus inside SoFi."

New camera locations, including a Skycam tucked inside SoFi Stadium’s Oculus, were utilized to match the contours of SoFi and the magnificent Oculus video board. The experience aired live on ESPN during the halftime break.

“Our Mixed Reality team has created some of the most impactful activations for leagues, teams, and brands across the industry,” says Isaacson. “We’re thrilled to help bring this innovative technology to a live college football broadcast for the first time. This campaign will showcase an iconic brand while also providing fans with a unique and immersive experience.”

The Famous Group was selected as one of this year’s 10 Most Innovative Sports Tech Companies. They were also nominated in the Best in Extended Reality and Best in Fan Experience categories for the Sports Business Awards.

TruePoint Laser Scanning provided 3D data to make this mixed reality moment come to life. By 3D laser scanning the stadiums, the existing spatial layout was captured with great accuracy. The computer-generated experiences were able to precisely interact with the physical environment.

“TruePoint is honored and excited to collaborate with The Famous Group to engage fans and audiences all over the world,” says Ryan Hacker, Director of Laser Scanning for TruePoint.