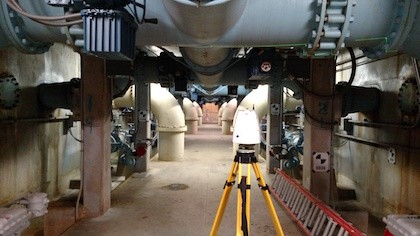 Task: Toledo’s Water Treatment Facility was built in 1941 and has undergone many additions and changes to the plant since the initial construction. Water system upgrades and improvements are constantly being made to keep the water system functioning at peak performance levels. Given the age of the water plant and on-going updates to the facility over the decades, the client had no accurate as-built drawings of the facility. The task was to laser scan the sub-level of a 120 million gallon per day (MGD) treatment area capturing all structural, mechanical, electrical and plumbing features, equipment and piping down to ½ inch in diameter.

Challenge: The water treatment plant was in operation and improvements were already being performed in various locations. The scan technician needed to very accurately capture thousands of pipes and features within the facility to help streamline ongoing and future projects at the plant.

Solutions: TruePoint Laser Scanning developed a comprehensive plan to scan the entire space and provide the client with current and accurate as-builts of the facility. Using traditional field measurements, documenting the facility would have taken months and the measurements could have been inaccurate. By utilizing scanning, TruePoint was able to capture an accurate and comprehensive assessment in much less time.

Deliverables: Spending multiple weeks on site, one technician conducted several hundred individual scans including full color panoramic photos in order to colorize the point cloud and create TruView’s. Over 4.25 billion data points were captured and nearly 38 GB of point cloud data to create a comprehensive data set of the facility. TruePoint delivered the point clouds in Autodesk Recap format (.rcs), generated full color photograph TruViews for the client and developed an intelligent 3D BIM Model (LOD 300 and greater) of the entire plant over the course of the project.

Added Value: The client will be able to return to the point cloud data and model over and over again for future projects. TruePoint worked closely with the client to add detailed tagging, schedule, and attribute information on various piping, flanges and valve systems to provide a fully intelligent BIM model (LOD 350-400 in certain areas). The client has a particular tagging system, which TruePoint utilized to ensure the information was inventoried using the same nomenclature. As future projects are completed, the client can update the model with added features or perform additional 3D laser scanning, which can be tied to and aligned with the existing point cloud data and shown as separate phases in the model.

Laser scanning is a great facility documentation and management tool with benefits that can be realized many times throughout the life of a facility, including the reduction of change orders. 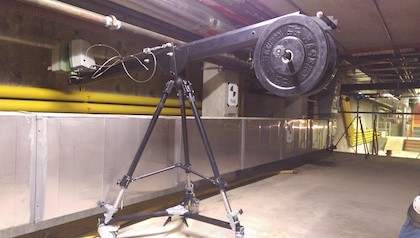 Laser scanner mounted on a jib to capture obstructed-view piping with restricted access. 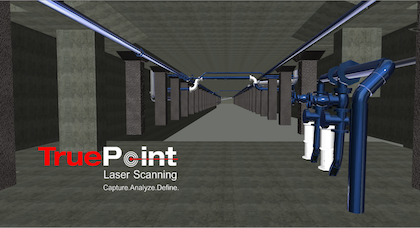 Intensity map point cloud of the sub-level of the 120 MGD treatment area. 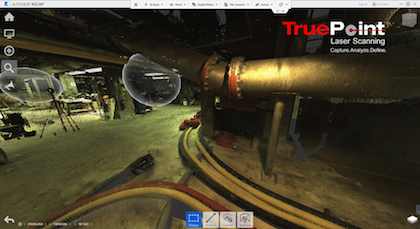 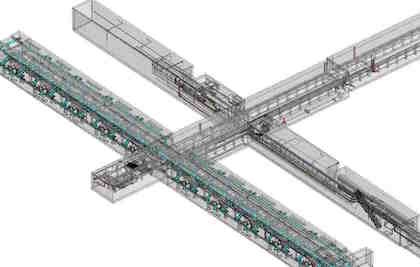 As-built BIM model of entire facility to be used for on-going operations of the plant as well as for future expansion and renovation projects. 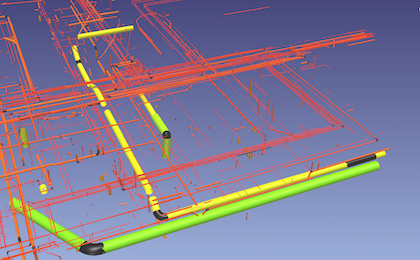 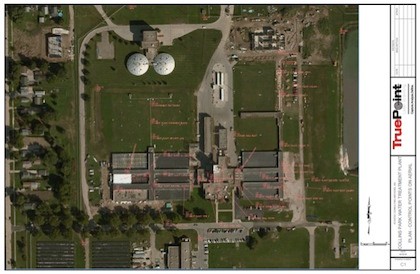 Site plan showing the locations of control points that can be occupied and tied into existing scan data. 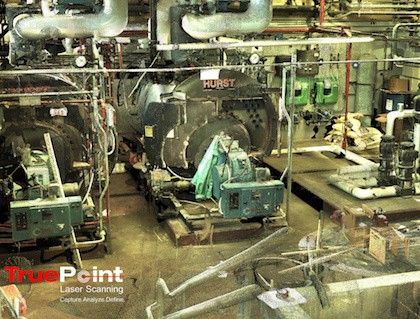