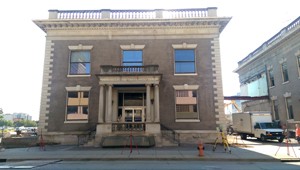 Task: To document the historical exterior façade of a landmark building set for demolition.

Challenge: The building's historical façade is being removed and safely stored for potential future re-use. As such, the client wanted a very accurate, highly detailed documentation of the building façade so that when they are ready to re-construct the façade on the new site they know exactly how it goes back together. Using photographs provides a level of documentation, but are not dimensionally accurate. Using traditional survey methods would be slow and not provide adequate detail necessary. Even a combination of photographs and traditional survey would be time-consuming and may not capture everything needed to re-build the structure. Once the building comes down there is no going back for additional measurements or information.

Solutions: 3D laser scanning takes millions of measurements per second as it scans the building's façade. The scanner's resolution is great enough to capture each individual brick, mortar joints, finite architectural detail, even cracks and peeling paint. And by further using the scanner's on-board camera, not only was a colorized point cloud created, but dimensionally-accurate 3D photographs (called TruView's) are also created. All of this high level of detail and as-built/as-is documentation was completed in less than half a day, all while demolition activity was underway in and around the site.

Deliverables: For historical documentation projects, the client will typically want a colorized point cloud and TruView's (3D photographs overlaid on top of the point cloud data) at a minimum. In this case, the client was also interested in LOD 300 2D AutoCAD drawings of the building's exterior façade.

Added Value: Since laser scanning is a non-contact measurement tool, TruePoint was able to scan while demolition continued in and around the structure allowing the contractor to keep on schedule and not having to idle or relocate the demolition crews to other sites.

For all of your historical preservation or historical documentation projects, call TruePoint Laser Scanning. In the Louisville, KY. area call us at 513-609-7244 or our corporate office at 419-843-SCAN (7226). 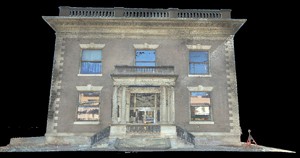 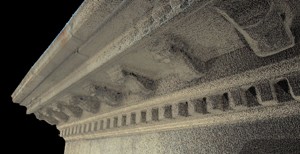