Task: The client is in the pre-planning phase of a renovation project and knows that they will need to do concrete coring in certain areas. The client realizes that they will have to hit rebar and other objects within the concrete floor, but want to plan ahead so they can determine what they are willing to hit and to map out how they can drill to minimize the number of hits. Ground Penetrating Radar Systems, Inc. was brought in to map out what was in the concrete floor. GPRS marked their findings directly on the surface.

Challenge: The client was looking for a fast and accurate way to take Ground Penetrating Radar's markings, that were marked directly on the surface of the concrete, and put them into a 3D model that their engineers could use to map out their pouring in order to minimize the number of rebar and post-tension cables that will be hit as well as which ones can be hit. Transferring these markings to a CAD model manually would be a slow and inaccurate process and would still require post-field manipulation after the data was collected.

Solutions: Using 3D laser scanning after GPRS marked their findings on the concrete surface, TruePoint was able to capture their markings and the surrounding building structure and put it into a 3D model that the engineers were then able to import into CAD and layout their coring plan.

A TruView – which is a 3D photograph overlaid on top of the point cloud allowing a user to move around the photograph and even take rudimentary measurements.

Point Cloud files (in .pts and .pcg formats), as well as separate .coe files with the polylines detailing GPRS's findings.

By engaging our services early in the planning process, the client is able to avoid costly design changes necessary down the road or major repairs due to hitting too many or the wrong cables embedded in the concrete.

If you have any concrete that you need to have scanned and built into a 2D or 3D CAD model to be used for planning or construction, contact us at 734-807-0117 or detroit@truepointscanning.com to discuss. 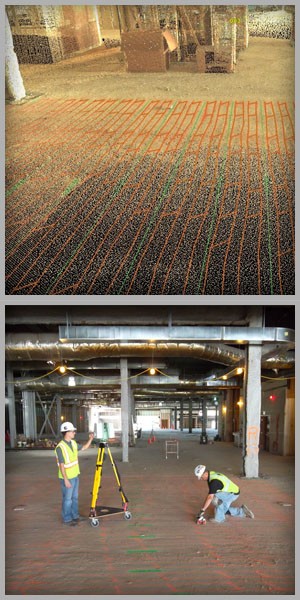