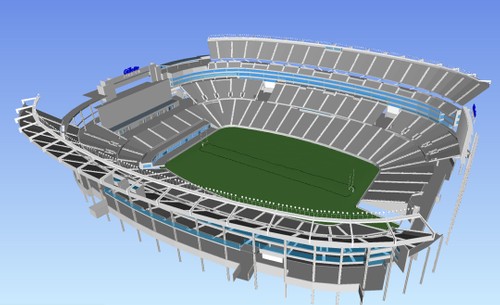 For more than 20 years, The Famous Group has engaged audiences for the biggest brands, venues and events in the world. During the Bears vs. Patriots Monday Night Football game at Gillette Stadium that aired on October 24, 2022, they produced a 45-second virtual reality video campaign promoting the Gillette Exfoliating Bar Razor.

The Patriot’s mascot walked into a locker room and flipped a switch to take the viewer to Gillette Labs, igniting an augmented reality experience. The mixed reality segment featured a giant razor floating over the field (the first time a retail product has been brought to life) and a closing fireworks sequence.

TruePoint Laser Scanning conducted a 3D scan of the stadium and delivered a 3D mesh model for The Famous Group to locate and place virtual objects in the correct camera space. Laser scanning collects millions of high-density points to provide the most accurate and detailed geometry. The point cloud data collected is then exported to an .obj mesh file.

Andrew Isaacson, Famous Group EVP/Business Development, said that the laser scan gave The Famous Group "pinpoint accuracy of the location of existing architecture," and "they used the mixed reality effects to make it come to life."

According to Dachman, “The Famous Group used Epic Games’ Unreal Engine and Pixotope to create real-time graphics that were merged with the live broadcast feed via two tracked cameras. The machines and infrastructure were provided by XR Studios and Thistle Communications, SMT handled the tracking.”

The Famous Group has been working on high-profile sports events, including the past 17 Super Bowls, NBA Finals, NCAA Final Four, the NFL Draft and many more. TruePoint has partnered with The Famous Group on many of these projects, providing the hyper-accurate data that has created the canvases for many of these mixed reality experiences. Read more about mixed reality here.

“The entire Gillette team was a dream to work with from the early stages to final delivery. The feedback has been overwhelmingly positive from all partners and on social media,” says Isaacson. “Collaborating with ESPN on the broadcast was exciting; they were fantastic.”

Gillette Stadium also used the laser scan data to plan for stadium renovations, set to be complete for the 2023 NFL season. The broadcast also featured a neon green videoboard displaying the plan for renovations.